I came across this article published by the USGA today. It does a phenomenal job explaining why and how green speeds can fluctuate from day to day. Take a minute and give it a look.
http://www.usga.org/course-care/forethegolfer/why-can-t-green-speeds-remain-constant-.html
Posted by Mike Armstrong at 4:06 PM No comments:

The buzz around golf this week surrounds Oakmont, the US Open and their massive tree clearing effort. It's remarkable what they have done to the golf course and results that have been achieved. Below is some media that goes in depth as to why they did what they did. Every golf course removes trees, whether it's one or 100s. These pieces explain perfectly why we as superintendents do what we do. Enjoy!
http://www.golfchannel.com/media/story-how-oakmont-turned-back-clock/
http://www.wsj.com/articles/timber-why-oakmont-waged-a-war-on-trees-1465849293
Posted by Mike Armstrong at 3:58 AM No comments:

Typically in November and December we are putting our golf clubs on the shelve and breaking out the warm weather gear. That was not the case this year! Most of the days ended up being above average temperature wise with not a flake of snow to be found. That allowed many of you to enjoy an abnormally long golf season. This weather not only benefited you the golfer, but it allowed some much needed projects to be completed. Usually in December the ground is frozen and our focus is on tree removals and pruning. Since the ground did not freeze until recently we were able to tackle some much needed project work.

5 green is always an issue after heavy rains or melting snow during the winter. There is a natural depression that collects surface water runoff from the green. This depression fills with water and a sizeable puddle forms. This is especially problematic in the winter months. If this water is allowed to freezes it can cause massive damage like we experienced in 2014. So to remedy the issue we installed a drain line into the middle of this depression. When the puddle of water forms the new drain will allow the water to escape the surface. On the end of the drain line we installed a what I call a seasonal riser. This riser comes to the surface of the green and allows the water to drain quicker. This riser is only exposed in the off season and is marked and buried during the golf season. This project is a huge improvement for the green and will help to prevent winter kill in the future.

The rough on the left side of 16 near the creek and cart path was in dire need of drainage. The area is consistently roped off after every rain storm. We installed just over 400 linear feet of perforated drain pipe and regraded the area as needed. During the installation we found multiple old broken drain lines, which was the main reason why the area was so wet. We will be seeding the area in the spring. We also did some similar drainage and regrade work to the rough on the right of 11 fairway to alevate similar issues.

We also began to do some work on the bunker at 1 green. The high face on that bunker made it difficult for sand to stay in place and there was large tree root growing in it. Also the edge of the bunker on both the left and right side was starting to collapse. To fix the problem we decided to backfill the high face of the bunker with soil and install sod. In order to form the new face we installed a temporary plywood wall to retain the new soil and form the face. Currently the plywood wall is still in place and will remain there until spring. This will allow the new soil to properly settle prior to installing the new sod. We will remove the plywood first thing in the spring, do some finish work and install the sod. This will make the bunker easier to maintain and improve its look.

The past few weeks has been a return to typical Western New York winter weather. The ground has begun to freeze making for ideal conditions to remove some trees. For the rest of the winter we are focusing on removing many of the dead evergreen trees around the course, Many of these trees are diseased and reaching the end of their life cycle.

I also wanted to include a USGA article on why we closed off the greens for the winter. I always get questions on this and it does a great job explaining why we do.


Stay warm and we will see you in the spring!

Posted by Mike Armstrong at 10:14 AM No comments:

It's hard to wrap my head around the amount of rain we have recieved over the last week. Since last Satutday we have got 5.25", which does not include the .6" we got so far today. By the looks of it there is more on the way tonight and more chances of storms through out the week. A month ago we couldn't buy a drop, now we are praying for it to stop!

One silver lining in all this madness is watching all the drainage we put in over the past few years do its thing. In 2011 we drained 1 fairway. 2013 it was the small fairway on 12. In 2014 1 and 4 greens were regraded along with drainage in 15 rough. The project on 14 is in progress and is already paying dividends. Prior to the installation 14 fairway would be a lake and pumps would have to run for half a day just to clear the water. That's no more, we haven't needed a pump down there yet this year. If things ever decide to dry out we will be finishing the rough on 14, moving to the rough on 16 and the area near 13 tees. My guess is we have cut at least 3/4 of a day off our pumping and water removal. It's along process draining a golf course, but as you can see we have come along way!

Thank you for dealing with all the closures and restrictions. I implement these for the good of the course. To keep the course in good condition they are a necessity. As much as you don't like them I hate them even more. it's an inconvenience to you playing and us maintaining, With the forecast ahead calling for more rain these restrictions will remain in place until we dry out. I ask for your continued cooperation in following these restrictions and respect the golf course. Before long we will be dried out and praying for rain again!

Also please like the MGC Facebook page for real time updates on course conditions as well as the online weather station for up to the second weather conditions. These are two excellent resources and I encourage you to use them. Links to both are listed below.

Hard to believe we are talking about frost on Memorial Day weekend. This is a heads up for anyone looking to play Saturday morning May 23rd. The forecasted low temperature is 35 degrees. There is a high likely hood there will be a delay. Please plan accordingly and check in with the proshop before coming out to play. Hopefully the delay will be minimal and we can enjoy the holiday weekend.
Posted by Mike Armstrong at 9:13 AM No comments: 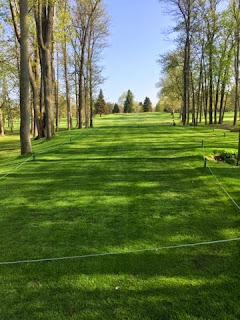 We have been hard at work repairing the areas from last seasons tree removals. It's a very important process that involves grinding the stump, picking up the grindings, digging out roots and filling the hole with soil. After the soil is leveled out a starter fertilizer is applied along with grass seed. With in a week we should see germination and with in a month it will be fully grown in. At the time of this post all the stump holes have been filled and seeded except for the area between 1 and 4 greens. This area is going to take some time to prepare and is on the to do list for next week.

13 tee is progressing nicely! We actually have some decent grass that has filled in the voids and the tee is looking healthy. We are planning on opening the tee starting Monday, May 18th for the U.S. Open Qualifer Tournament. As stated in prior posts, keeping the tee in this condition moving forward is going to require removing trees. This area is being pushed to the top of the list for this falls removals. 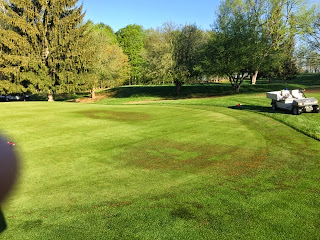 I also wanted to address a question I have been asked by both you and my staff, "Why are there two large orange spots on 5 green"?  If you remember last year we had large scale winter kill on these two spots. We reseeded these areas with bent grass. The orange color you see is a side effect from our poa annua seedhead suppression application. This application prevents the annoying seedhead that makes greens bumpy in the spring. The side effect of the application is the bent grass turning off color. The orange color is always more pronounced in younger bent grass plants. Luckily this is only temporary and it will dissipate in the next week or so.

You may also have noticed the rain shelters are currently being rebuilt. They are stronger and drier than ever!!

As you can see we are busy, busy, busy!!
Posted by Mike Armstrong at 11:19 AM No comments:

Well the weather this week was far from ideal for aeration, but we powered through and completed the greens. Starting Monday we are planning on aerating tees and finishing solid tining the last few fairways. Aeration is a word golfers hate to hear, but this practice is vital in creating a healthy turf stand. I came across this video and wanted to share it with you. It does a great job explaining why we aerate. Have a look!

http://tinyurl.com/lkt9jvd
Posted by Mike Armstrong at 8:09 PM No comments: